Things to do in Morocco:

Morocco, named as al-maġrib, place the sun sets, the west.

It is estimated that almost 99% of Morocco’s citizens are Muslim. Morocco facts indicate less than 1% of the Moroccan population is Jewish or Christian.

Morocco has two official languages: Arabic and Berber. Berber is a dialect in North Africa that has Afro-asiatic roots. French is also spoken by one-third of the population, and is a mandatory language in schools.

Morocco is believed to have been inhabited since the Paleolithic era in prehistoric times, sometime between the years 190,000 BC and 90,000 BC. Morocco facts show the land has been home to Romans, Visigoths, Vandals and Byzantines. More recently, Morocco was a protectorate of France and Spain, and gained independence in 1956.

My photography trip was several years ago in April. We started driving from Rabat and ended at Casablanca. Most popular places in this route:  Meknes, Fes, Quarzazate, Erfoud, Marakkesh, Casablanca

Rabat, a city styled in an elegant European touch. Rabat and its twin city Sala Colonia are separated by only a river but are historically worlds apart. They have an ancient legacy that spans hundreds of generations.  Each civilization that has inhabited each of the cities has left its mark, resulting in a wide variety in architectural styles, including those from the Phoenician and Roman eras.

Hassan Tower is the minaret of an incomplete mosque in Rabat, Morocco. When al-Mansur died in 1199, construction on the mosque stopped. The tower reached 44 m (140 ft), about half of its intended 86 m (260 ft) height. The rest of the mosque was also left incomplete, with only the beginnings of several walls and 348 columns being constructed

Visit the area of Mellah, jewish village. Rabat’s Oudaias Kasbah neighborhood has to be one of the country’s most picturesque place. Moroccos are living here in the area of blue-white painted streets

Driving from Rabat to Meknes takes about 1,5 hour. Meknes is located in the Middle Atlas region. The city is known with beautiful gates and engraving.

Meknes became the capital city in the 17th century. The core of Meknes’s old city is within the imposing walls of the medina. The ancient fortified city can be entered through numerous gates, several of which are very impressive.

Bab Mansour is often said to be one of the most beautiful gates in all of Morocco, and one of the world’s finest entrances. Arches and columns, wood carvings combine to make this a photogenic beauty.

Bab el Khemis is another well-preserved splendid gate into Meknes’s medina. The arched gate stands between two towers, and there are many examples of traditional Islamic craftwork to be admired.

A visit to the final resting place of the sultan who made Meknès his capital in the 17th century should be a rite of passage for those travelling through town. It is also considered to be the Versailles of Morocco

Driving from Meknes to Fez is around 1 hour. Fez has around 1,1 million population. Oldest university is located here, Al-Karaouine, currently operating.

The old city Fez, Fes el-Bali is perfect for street photography. There are thousands of small stores in the centre. Good to try your negotiation skills. Streets look similar, so it is very easy to get lost here.

UNESCO listed Fes el Bali as a World Heritage Site in 1981 under the name Medina of Fez.

Leather production in old city, with a strong smell. PUT mint in your nose, it is not a joke !

Fez Royal Palace Gate is a perfect photo spot, better with afternoon light. Royal Palace is from the times when Fez was capital city, and printing money.

The Kairaouine Mosque (Djemaa el Kairaouine) in FES is the second-largest mosque in Morocco.

Driving from Fez took us quite long time, around 7 hours (410 km). Amazing views of beautiful gorges and villages on the way.

Erfoud in the entrance to Sahara sand dunes. Sunset and sunrise is the best time to be on the camel and best light for photography. Long shadows gives very inspiring photos.

Camel riding at Sahara was in my bucket list, so well done trip:)

We sleep in Sahara desert camp and wake up early morning before sunrise for camel riding tour to the sand dunes.

On the way to Quarzazate, you will drive through Tinghir city, Todgha gorge and Atlas Mountains. You will see lots of goats on the trees, camels and donkeys used for transportation.

Tinghir province is located at the south of the High Atlas and north of the Little Atlas in southeastern Morocco. Its name originally referred to the foothills of the Atlas Mountains.

Todgha Gorges are a series of limestone river canyons. The last 600 metres (1,969 ft) of the Todgha gorge are the most spectacular. Here the canyon narrows to a flat stony track, in places as little as 10 metres (33 ft) wide, with sheer and smooth rock walls up to 160 metres (525 ft) high on each side.

In the morning, we start driving to Marakkech, stopping at Ait BenHaddou Kasbah. This is well known route between the Sahara and Marrakesh. Most citizens attracted by the tourist trade live in more modern dwellings in a village on the other side of the river, although there are four families still living in the ancient village. Inside the walls of the ksar are half a dozen  Kasbahs or merchants houses and other individual dwellings, and is a great example of Moroccan earthen clay architecture. Aït Benhaddou has been a UNESCO World Heritage Site since 1987

Several movies were filmed here, most popular ones are the Mummy, Gladiator, Alexander, Babel…

You can even sleep within the kasbah if you want the full Ait Ben Haddou experience – though those who like their comforts should be aware that there’s no electricity within the fortress itself. If you’re heading out into Morocco’s inland regions, it should definitely be on your must-visit list. Try to come in the early morning or later in the afternoon, as the tour bus crowds descend from around 10am to 2pm. During the day time,The temperatures reach up to 40 degrees, makes it difficult to walk uphill to the top of casbah.

Thanks to the red walls and buildings constructed with sandstone in the 12th century, Marrakesh is known as the Red City.

Lets start our tour in Marrakesh:

The Souk, streets in Medina (old city) might be little crowded and overwhelming. Just stay calm and follow the flow. They are perfect for street photography with colors, energy and vibrance. A big variety of products are sold here: spices (you can smell Safran everywhere), bags, local shoes, clothes, carpets, baskets,…

Jemaa- El-Fna (The Central Square), is a square and market place in Marrakesh`s  medina quarter (old city). It is very attractive place both for locals and tourists.The name comes from death square. Now it is on contrary very lively:)

During the day the square is full of surprising sights, from monkey trainers who have trained the apes to climb all over tourists to snake charmers, as well as dentists that expose the teeth they have recently extracted. You will also find numerous stands selling orange juice, spices, mint leaves and snails. Try the fortune tellers and henna tattoo artists if you want…

At dusk, Marrakech’s main square transforms and the morning stalls disappear to give room to food stands where visitors can have dinner surrounded by Moroccan musicians playing traditional music and various other shows.

If you don’t have previous dinner plans, the food at these stands is quite tasty and very cheap.

Best time is after sunset, the blue hour. You can choose a coffee shop in the 2nd floor, overlooking to the square and enjoy your mint tee or Moroccon coffee here.

With origins in Ancient Egypt and India, snake charmers were once magicians or healers; they needed to know how to handle snakes correctly –

Bahia palace was built in the late 19th century, intended to be the greatest palace of its time. The name means “brilliance”. As in other buildings of the period in other countries, it was intended to capture the essence of the Islamic and Morocco style. There is a 2-acre (8,000 m²) garden with rooms opening onto courtyards.

Set up at the end of the 19th century by Si Moussa, grand vizier of the sultan, for his personal use, this palace would bear the name of one of his wives. (4 rooms for 4 wifes) Here, the harem, which includes a vast court decorated with a central basin and surrounded by rooms intended for the concubines.

Koutoubia mosque, is still protected after 800 years. The Koutoubia Minaret, 67 meter long which is identical to la Giralda, a tower found in Sevilla, Spain.

Menara is the calmest part of the city, surrounded with gorgeous gardens and Atlas mountain view behind. Menara has a magnificent pool surrounded by flowerbeds, reflecting the image of an exquisite Moorish edifice. It was constructed in 1866 for dignitaries, who enjoyed glorious sunsets with the ethereal Atlas Mountains as a backdrop.  The pool also functions as an innovative irrigation system that is serving dry life in the desert. 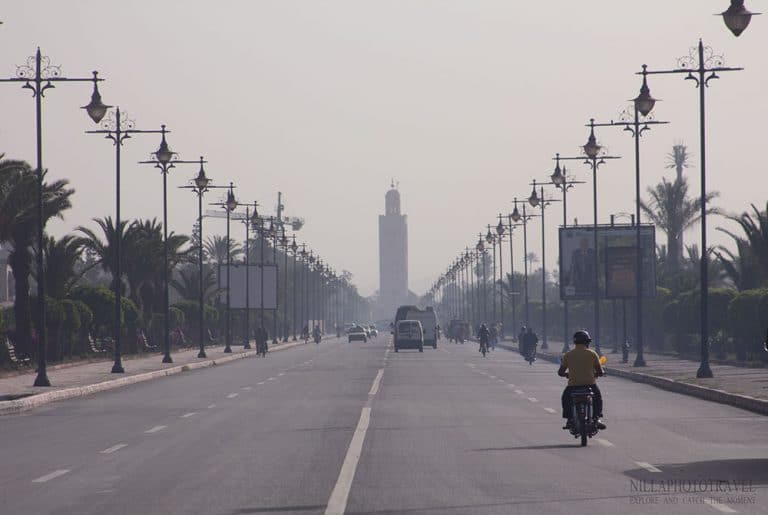 Driving from Marakkesh to Casablanca is 237 km.

While Rabat has the distinction of being the capital of Morocco, Casablanca remains the country’s largest city, as well as the largest city in the Maghreb region of Africa. The name of the city is “White House”

Morocco facts tells us Casablanca flew into the world’s imagination in 1942 when Humphrey Bogart and Ingrid Bergman hit the silver screen in a famous movie featuring the port city.

Hassan II Mosque, Moroccos biggest mosque. 210 m.minaret length, worlds 7th biggest mosque. 120 000 people can pray here at the same time. The praying area for man and women are separated. If you are a woman photographer and want to enter to men praying area, you must join the guided tour at 14:00. This is the only chance.

Moroccan cuisine is very diverse. It features dishes from Europe, the Mediterranean, and its Berber roots.

Tagine: named after the earthenware pot in which it is cooked, the tagine with beef or chicken or lamb.

Tee: Moroccans enjoy a special green tea drink called atai. Atai is a mix of green tea, mint and sugar. Brewing and serving tea is considered an art form in Morocco and holds cultural significance. Guests are often offered tea and it is viewed as rude to not drink the popular beverage.

Couscous: The origin of couscous appears to be in the region from eastern to northern Africa where Berbers used it as early as the 7th century.

This is the end of another nice photography tour. Our time was limited in Morocco, we could not see Essaquira, Volubilis, Tangier, Chefchaouen (blue city).

Always something more to discover:)