Do you want to explore one the best photographic countries and see the best landscape and the best light? Enjoy the unspoilt environment, midnight sun and Aurora Borealis? Iceland is the right country. Most of all, it is the country of fire and ice, water and wind.

Iceland is in the middle of Atlantic, near the Arctic circle and the nearest neighbouring country is Greenland, just 286 km. Still, no one is freezing to death because the Gulf Stream provides mild climate here.
It takes 3 hours from London and from Sweden to reach Reykjavik Airport.

Iceland is formed 25 million years ago, still is the youngest land in Europe. The island is home to most active volcanoes. The last volcanoes to erupt were Eyjafjallajökull in 2010 and Grímsvötn in 2011. Iceland even has one of the world’s newest island, Surtsey, formed in a volcanic eruption in 1963.

It is definitely worth to visit the long, deep fjords and glaciers. More than 11 percent of the country is covered by glaciers. Most noteworthy, the Europe’s largest glacier is in the island, named Vatnajökull.

With almost 80% of the country uninhabited, much of Iceland’s terrain consists of plateaux, mountain peaks, and fertile lowlands. Only few mammals live in the island: Arctic fox, strong Icelandic horses, reindeer, cow, sheep, goat, dolphins, whales and seal. No snakes in the island:)

The capital, the northernmost place, is a modern city, full of green areas, heated by geothermal springs. 200 000 of the population is at Reykjavik, more than half of the entire island population.
There are charming colorful houses, cozy cafes, and state-of-the-art architectural landmarks here, such as Hallgrimskirkja and sculpture title Solfar, 1971 which is a representation of a Viking Ship. During summer, it reflects the sun rays until dusk.

Iceland’s most popular festival, Reykjavík Culture Night, an annual summer gathering of 100,000 guests and 600 events to signal the beginning of the city’s cultural calendar. Nightlife is fun here, thanks to friendly Icelanders.

The Blue Lagoon spa is one of the most visited attractions. The spa is located approximately 20 km from the Keflavík International Airport and 39 km (24 mi) from the capital city of Reykjavík. The warm waters are rich in minerals like silica and sulfur and bathing in the Blue Lagoon is reputed to help some people suffering from skin diseases. The water temperature in the bathing and swimming area of the lagoon averages 37–39 °C.

Geysir
Geothermal springs throughout the country is often used to produce electricity or to heat homes. Today Geysir is tired and there are new springs to visit in the area such as Strokkur. The boiling water and steam comes out every five minutes, around 30 meter height. It is 100 km distance from Reykjavik, and we preferred to rent a jeep to drive there. You can also join tours from Reykjavik called “golden circle tour”.

The Golden Circle is a popular tourist route in southern Iceland, covering about 300 kilometres looping from Reykjavík into the southern uplands of Iceland and back. It is the area that contains most tours and travel-related activities in Iceland. The three primary stops on the route are the Þingvellir National Park, the Gullfoss waterfall, and the geothermal area in Haukadalur, which contains the geysers Geysir and Strokkur. Other stops include the Kerið volcanic crater, the town of Hveragerði, Skálholt cathedral, and the Nesjavellir and Hellisheiðarvirkjun geothermal power plants.

A perfect photography trip recommendation is with Haukur Snorrason. He and his wife has a great cottage in the hearth of southern landscape. This location is perfect to discover the area with his 4 WD, often to the remote and undiscovered places.Do not miss the great Icelandic dinners by Hadda.

Driving 1st road from Reykjavik will take you all must-see places at the southern part.

Gluggafoss waterfall is a moderate to low volume, but very unique waterfall found along the Merkjá, just northwest of the volcano Eyjafjallajökull. The falls drop in two steps, What makes the falls so unique is the upper tier drops over a ledge formed by stratified Tuff (basically heavily compacted ash, sand, and boulders) which is easily eroded.

Laki eruption Iceland – one of the largest volcanic eruptions in 1784. It wasn’t a enormous explosion, however, it did have an impact on people living around the entire Northern Hemisphere for years afterwards. As a result, the health of the people living in the area and the agriculture was heavily affected.

Arriving to the cottage in the area of Skaftartunguvegur, do not miss to take photographs of the church nearby, Grafarkirkja.

Landmannalaugar
Active from a geothermal point of view, natural hot springs and geysers. Beautiful colours, light and shades: orange, brown, yellow to green. Seems like, these areas are not so common for tourists to visit. It is only accessible by 4WD vehicles.

The melting water from the snow causes high level in the rivers, before June it is not possible to drive in some parts here.

About Laugavegur hike – from Landmannalaugar to Thorsmork: The total hiking distance is close to 53 km and the route from Thorsmork to Skogar on the south coast adds 24-26 km. The Landmannalaugar – Thorsmork route is called “Laugavegurinn”, The Hot Spring Route, which is very appropriate. The landscape is beautiful. However, I do not recommend at a photography tour because of the long time spent. 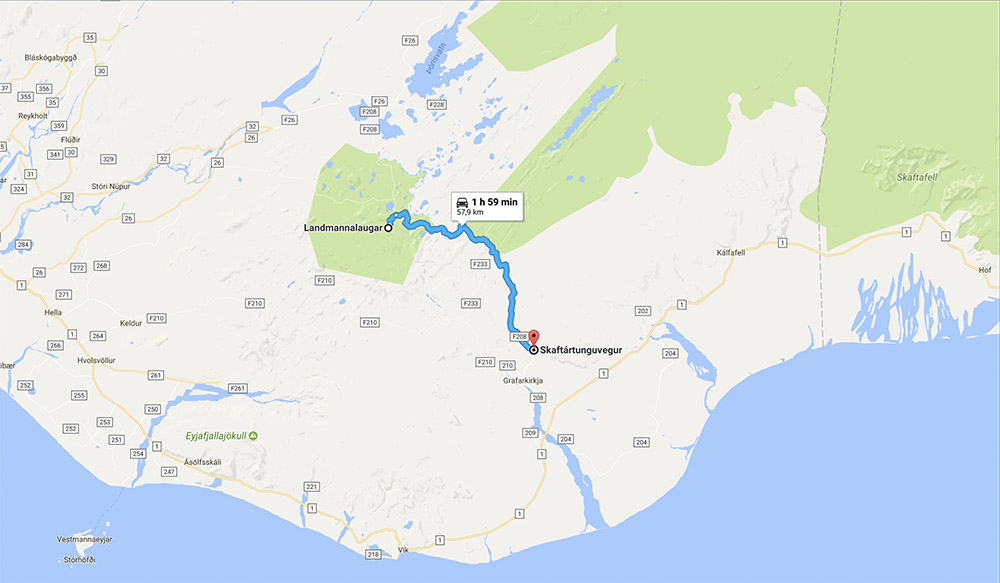 The Southern Part of National Park: On June 7th 2008, the whole glacier and some of its surroundings, two existing National Parks, and some nature reserves, were declared Europe’s larges National Park, Vatnajokull.
This place is popular for hiking and camping.

Vik
At southern coast, in the area of Vik, there are high cliffs. The waves of Atlantic Ocean create forms at the rocks. There is a black sand beach. 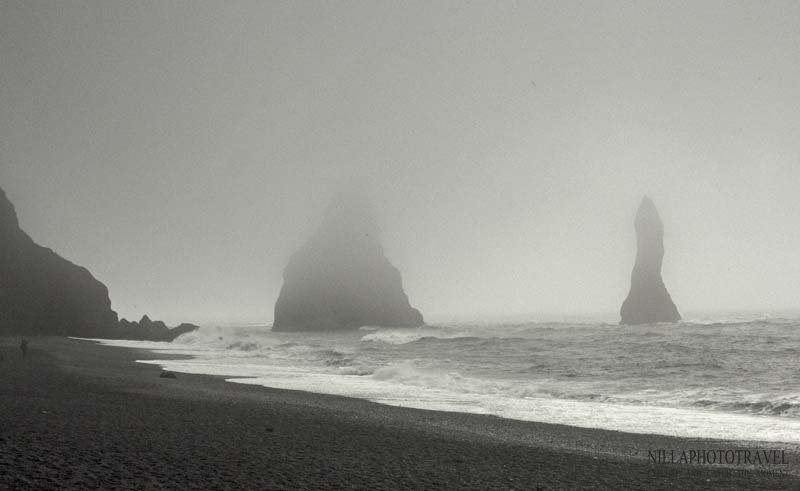 Reynisfjara is a world-famous black-sand beach found on the South Coast of Iceland, just beside the small fishing village of Vík í Mýrdal.

With its enormous basalt stacks, roaring Atlantic waves and stunning panoramas, Reynisfjara is widely considered to be the most beautiful example of Iceland’s black sand beaches. In 1991, National Geographic voted Reynisfjara as one of the Top 10 non-tropical beaches to visit on the planet.

The puffin is one of the characteristic inhabitants of Icelandic coast. They have large colonies on the high rocks, in total approximately 10 million.

Day 3: Rent a car to Geiser and Gulfoss (or take the golden circle tour) 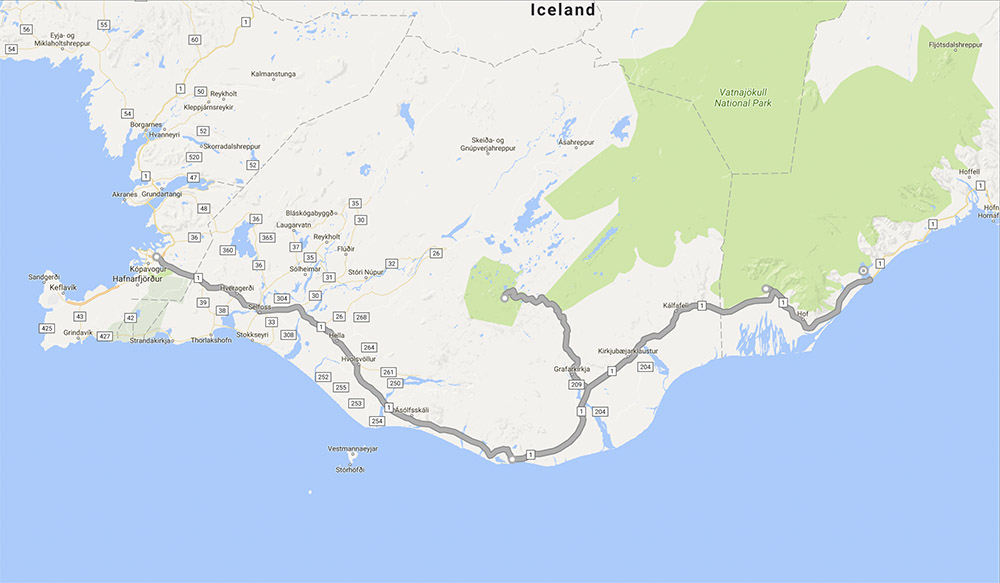